Although the Nepomuk region has never had too much industry, you can find here not only quaint old houses and homestead courtyards, but also more or less preserved historical production plants. These are mostly industrial monuments from the period before the industrial revolution that can typically be found at a number of large manors. For centuries, breweries, brickyards, sawmills, steelworks or iron mills were an integral part of the Czech countryside. They were mostly small-scale operations supplying the local, but sometimes more distant towns and villages. We would like to invite you to go for a walk and visit some of the often neglected sights that bear witness to the history of ordinary life in this region.

You can start your walk at the Gruenberg Post Office in Nepomuk. This small chateau in the northeast section of the historical center of Nepomuk was commissioned by a local governor, Daniel Táborský from Hirschfeldt, to be built as his family home in the second half of the 17th century. In the 18th and 19th centuries, before the arrival of the railroad, the building served as a postal service coach station, a predecessor of a railroad station of sorts.

In the former stalls, you can find an museum of vintage vehicles; there are several dozen historical motorcycles, but the exhibits also include locksmithing tools and agricultural machinery. During the tourist season, the exhibition is open daily except for Mondays.

Past the Na Vyskočilce Inn, near the Gruenberg (Zelená Hora/Green Mountain) Chateau, you can see a small structure with a chimney – a former blacksmith’s workshop. After that, follow the road to Klášter. On the right-hand side, below the Chateau, you will find Sternberg Manor, part of which was the Gruenberg brewery. The brewery buildings have been preserved to this day and can be easily identified from a shorter distance (the kiln with a chimney, malthouse, lager cellars, etc.).

A hundred years ago, there were three breweries at the foot of Zelená Hora – two of them were in town, the third was located here. The Gruenberg brewery produced almost 6,000 hectolitres of beer a year, though according to today’s standards it was a micro-brewery. 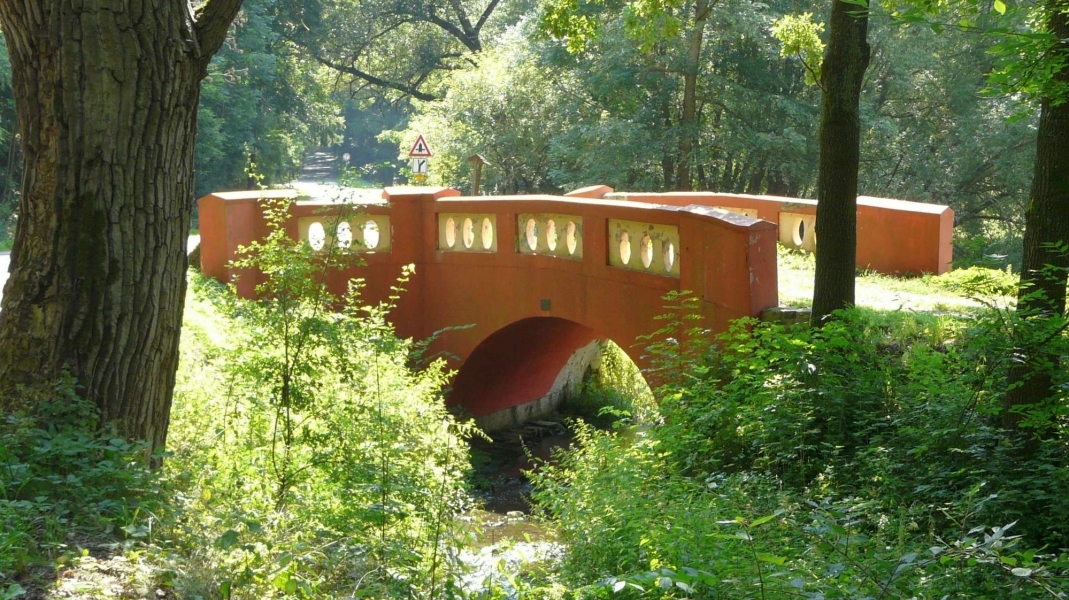 Then continue towards the Baroque Červený most (Red Bridge) and follow the red-marked trail across the bridge. After a hundred meters, if you look towards the west, you will see a single two-storey house in the field. It is the last remaining part of the former brick factory, whose kiln and chimney were torn down in the 1960s. The red-marked trail continues across the embankment of a former pond, but you will walk along the Muchovka Creek all the way to Klášter. Here, cross the bridge to the other side of the Úslava River and go on along the embankment of Klášter Pond.

At the end of the embankment, you will find the former millhouse. The Romanesque windows in the surrounding walls are a clear sign that this is one of the oldest buildings in the Nepomuk region, a building that once was part of the former Cistercian Abbey. It is not entirely clear what purpose it originally served, but there is proof of the existence of a mill in this spot in early modern history. In the 19th century, the building served as a potash plant.

Follow the path past the mill-race to the weir, above which the river feeds a new mill-race that brings water to Huťský pond. Follow the new Helenka bike trail and after about half a kilometre, you will reach the former Rott sawmill, which the water wheel used to propel. The timber-frame structures of the sawmill were demolished in the second half of the 20th century; however, the residence, though nowadays featuring a modern extension, has been preserved to this day.

Not far from the sawmill, you will find Huťský and Panský ponds. The sophisticated system of ponds was built in the first half of the 18th century as a water reservoir to drive the manorial steelworks and iron mills. What’s interesting is the fact that the pond was not created by building a dam across a valley, but rather it runs parallel to the Úslava River. Therefore it has not only one, but two embankments, one along its east side and one along its north side, which is over 600 meters long. In the 1860s, the railroad divided the pond into two parts.

Then you will ride through a stone underpass and find yourself in the Železná Huť (Ironworks) suburb. As the name suggests, it was originally a workers’ settlement in close vicinity to the Zelená Hora metal factory. In the mid-19th century, there were two blast furnaces, a foundry and an iron-mill there, with a total of almost two hundred workers. The buildings of the former ironworks have remained on the pond’s embankment to this day. When iron production ceased in the 1880s, the building was transformed into an oil mill plant, and later, in the 1920s, into a grain mill. The former administrative building, the “shift house”, with a mansard roof, which can be found in the bend below the village chapel, has been preserved in the original design. Unfortunately, the residential quarters for employees, a remarkable house with a half-timbered upper floor, was recently demolished.

From there, continue down the road in the direction of Blovice, past the buildings of the former ironworks, and after crossing the river, you will pass the former manorial sheep farm. After that, turn right onto a dirt road. The structures appearing ahead are the buildings of the Baroch Mill, which dates back to the Middle Ages. The existing millhouse was built in 1906 and all its machinery dates back to the same year. The interior of this technical monument features several American roller mills, grain elevators, grinding mills and a still functional Francis turbine that drives not only the mill, but also a small hydroelectric plant.

Then you cross the river and turn right after the millhouse. The dirt path will take you to an asphalt road, where you will turn right again and continue all the way to the Vrčeň village square. In the lower part of the village square, next to another Baroch millhouse, you can find the Historical and Model Railroad Museum. From the Vrčeň square, continue along the road towards Dvorec, and past the bridge across Myslívský Creek, on the right-hand side of the former embankment, you will see the railroad station waterworks, located on the site of an iron-mill from the early modern period. The authentic and well-preserved structure from the late 19th century features untypical hexagonal glass bricks. Continue up the hill, past the former coaching inn, and do not miss the former railroad heating plant, nowadays a joinery shop, on your left, before the railway crossing. It is the last railroad building in Nepomuk that has been preserved in its purely Neo-Renaissance style. After the railroad crossing is the Nepomuk railway station, where you can catch a train and go down the former Franz Joseph Railroad either to Pilsen or České Budějovice. Alternatively, you can follow the green-marked path back to town and get back to the Zelená Hora Post Office, where your journey started.